What is Fear Anyway? 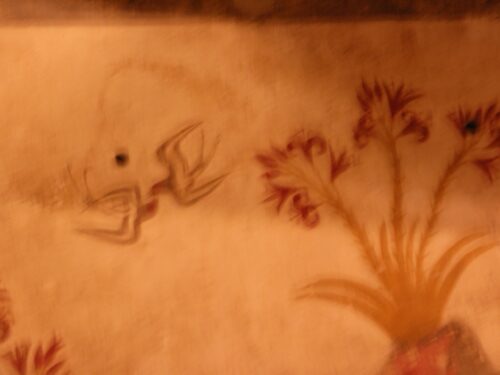 Early one morning, I was standing at the kitchen counter gathering a handful of red clover herbs from the jar in order to transfer them to my French Press where I make tea to hopefully make my bones stronger, wondering how I could do this without making a mess on the counter which would irritate my clean-freak partner, (he doesn’t say anything but I see him cleaning it up quickly & imagine his disgust). In the midst of this reverie, I suddenly saw something, not out of the corners of my eyes, but from the bottom of my eyes, below my glasses. The “something” moved and startled me. Immediately I guessed it was a mouse.

I looked but there was really nothing there. Nothing. Except my fear. I put my right hand on my heart and said to myself, “Fear is just a feeling.”

I ended up saying it several times. “Fear is just a feeling.” I calmed myself down. The ability to accomplish this has taken more than a decade of Freudian psychoanalysis. And still, it wasn’t easy to do. But I didn’t run out of the room. There wasn’t even the blood-curling scream that my parents said would wake the dead.

Instead, I told myself that even if it was a mouse, it was not going to hurt me, something I’ve heard countless times after I’ve screamed during the years I have been terrified of mice. The knowledge that I wouldn’t get hurt never helped before but on this morning, it seemed to make sense in a new way.

I could hear the reality of the advice when I tamped down my anxiety and fear.

Synchronicity was definitely on my side when shortly after that, I sat down to meditate. Tears came to my eyes when I read the first part of the reading Susan Piver chose for the day, one of Pema Chodron’s jewels:


“If you touch the fear

instead of running from

it, you find tenderness,

sometimes a sense of

I felt all of that – I felt a tenderness towards myself that I could actually calm down, I appreciated how vulnerable to this fear I am but didn’t let it take over. And the sadness was there too. Sadness about another good friend who died, this time of COVID. Larry, a friend who supported me professionally from the very beginning of my career. And then grieving Bill, my social work friend and member of my first writing group who also died of COVID. And still, of course, grieving my woman friend Jeanne from TN.

So many feelings and they were all available to me because I touched the fear. The rest of Pema’s reading is below because I resonated with all of it and hope you will also.

Let me know what you do when fear takes over. It will undoubtedly be something different from what I fear that you deal with but I’d like to know how you manage it. If you want more information about what I learned in analysis, check out my memoir.

Here’s the rest of Pema’s wisdom:

naturallly when you start

to be brave enough to

turning to anger, self-

your eyes open and you

the blueness of an iris,

the wetness of water,

the movement of the

in touch with ourselves

world and for other

people. It can sound

corny, but you feel

grateful for the beauty

of the world. It’s a very

special way to live. Your

heart is filled with