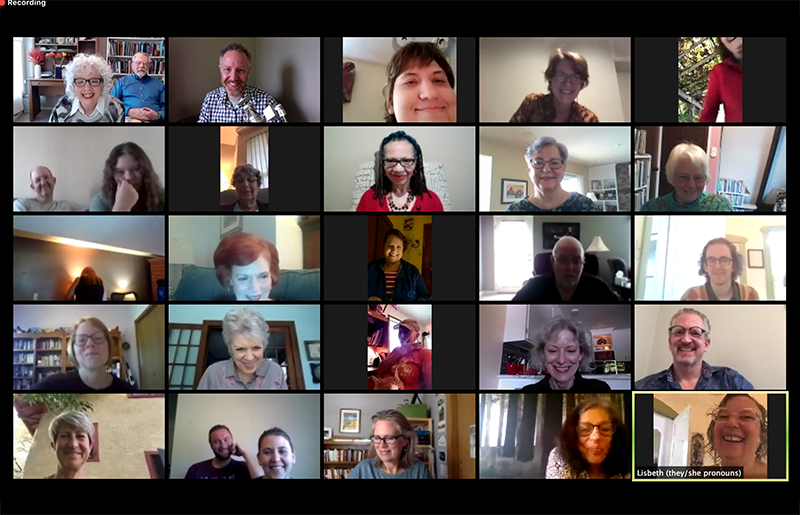 I am here to tell you that a Zoom 75th birthday party and a book launch scheduled on the same day my mother died twenty-three years ago (she was 75) required a level of consciousness that would not have been accessible to me before my decade of psychoanalysis.

Why do I say this? Here’s a reflection on what happened before the big day that may not on first thought seem life-changing, but was a different way of being in the world that resulted in a tremendous change in my life and the life of my spouse.

As the big event drew closer, I started to meltdown. I was sure that I would not be able to manage myself – sure that my frogs would interfere with my voice, certain that I wouldn’t be able to think when people asked me questions. It was doubly disappointing that I felt this way when I was celebrating the termination of successful psychoanalysis. Had it all been for naught?

With enormous effort, I remained cognizant that the feelings of overwhelm and doubt that were occurring before the big event were nothing to freak out about. This, despite the fact that the feelings were quite strong and if given any headway, had the capacity to – as I used to say – ruin everything.

Buddhists speak of the difference between pain and suffering and this may help us understand. Let’s say you are feeling pain from a sinus headache. I’ve had killer sinus headaches in the past and I suffered more from them than was necessary because of how I thought about them.

When I blamed myself for them, saying either that I ate something I shouldn’t have eaten or that I should have gotten more sleep, I suffered. I felt worse.

When I could remember that everyone has a physical issue to deal with either chronically or once in a while and that no matter what I did or didn’t do, I would always have a physical illness of some sort, I didn’t suffer as much. In other words, when I was gentle with myself and assured myself that I could take care of the symptoms and rest and drink lots of fluids and didn’t beat myself up over getting ill, the pain continued but the suffering was lessened.

The fact that I felt insecure before a big event made it necessary to wake up and be aware of reality, of what was actually happening. Were these real fears or imagined fears? It also meant that I could tell my friend when she called and asked if I was getting excited about the party, the truth. I could tell her that I was having a crisis of confidence.

Initially, reporting my insecurity felt extremely awkward. My old above it all persona wanted to make an appearance & say that I was doing just fine. But what happened was that my being vulnerable with my friend, gave her the opportunity to tell me of her recent experience and that when she began to feel insecure, she realized that she had to trust her gut. Then she gave me some instances where she had done that.

It was so helpful to hear her story. I didn’t feel so alone. And I was able to remember what I’d learned in analysis: Feelings are an important part of the letting go process and the transformation process and that they change if we pay attention to them.

And that’s what I did. Relaxed with the idea that I was feeling upset regardless of all the good things that were happening. I woke up on 10-10-2020 feeling more like myself. And I had a wonderful time!

Do you ever have a crisis of confidence? How do you manage it?

Pick up a copy of Fear, Folly & Freud at Beaverdale Books, Amazon, or Barnes & Noble. Let me know if you have any questions.